How to get clients in the door with a Selfie Contest

We all know that social marketing is king. But there's so much hype and mis-information from companies trying to get you to pay for their advice, it's not always clear on how to build your business page and following.

About a year and a half ago I started a new "test" business so we could experiment and and measure actual results from our marketing efforts. So often, all we get is hyperbole and exaggeration from most of the "experts" in the field. I wanted to know and report the whole truth and nothing but the truth.

For those of you who attended our January 2015 boudoir Webinar series, you may remember the extreme detail we went into on marketing and the results from our various efforts.

So a year and a half later we're well into the business and for the past 6 months the marketing efforts have been strictly about building a following of potential customers. We took a long hard look at the type of client we were after.

First and most obvious is the fact that we're a Boudoir Studio. So women are our prime target. But wait. Wouldn't husbands buy boudoir gift certificates for the wives? Well yes. But so far experience has taught us - not so much. It does happen, but not as much as you think. So lets not drop the ball and lose focus on who the real target is.

Boudoir photography is about vanity. Sorry, but yes. That's the key motivation behind it. And if we think about it, there's vanity in all of us. Male and female. But young women have it a bit stronger than most. Actually, I think the urge is the same in all, but younger women who are proud of their looks probably are more likely to act on it than their older counterparts. Once women start having babies and a few body image issues start up, they're less likely to want to strut their stuff.

But here's the dilemma. The younger ladies don't always have the budget to spend on what amounts to a "luxury item". And frankly, there are so many photographers that will photograph a model for free just for samples, it's hard to get paying customers out of that group. So we move on then.

The more mature ladies are more likely to have a budget. But this is the group that is a bit shy about their bodies. But, as business owners,  it's the money we're after 🙂

So here was my plan.

To capitalize on the vanity factor I started offering a "Selfie Contest" on Facebook. I planned to promote this and share it to get exposure. You can "boost" a post on your business page for just a few dollars. I usually start with $20 and might add another five or ten later on.

The contest runs for the last 5 days of the month. My boost is defined as only to people who like my page and friends of people who like my page. NOT - to the general public. I'd do this regardless of how many likes my page has. At first I only had a few likes, andt that was fine. Going to the open community is treacherous waters.

The deal with Facebook is to increase what Facebook calls your "edge rank". That's their algorithm to decide how much your posts should be seen and who should see them. You increase your edge rank by getting more views and "engaging" with those users.

So I know I'm promoting to people who like my page and their friends. But what about age range? 18+ for sure, but should it be more refined than that? If young clients don't have money to spend, why would we promote to them? So maybe it's not about just selecting 18-65.

But lets think again. Look at this report on one of my contests where I did select 18-65.

It's obvious that the 18-24 age group is the most active on this campaign. I can think of a few reasons for this, but lets say for our purposes it's about the vanity thing.

In my boudoir photography experience this report mimics pretty closely to actual clients. I won't take clients under 18, and the oldest client I've had was 67. I get bigger sales from the 35-44 group, and I get more volume from the 18-24 range.

So the younger ladies are more attracted to participate in the contest, but remember. To win they have to get votes. They get votes by sharing the contest with everyone they know asking them to vote for them. On average, most of our contestants wind up with 20-40 votes. So that's 20 to 40 people they brought to my page for me. Many of those people are not 18-24. So to cut off that group would undermine the entire campaign.

Check out these stats.

For less than $30 I reached over 11 thousand people in my target community. Hundreds participated and commented. Several clicked through to my website, and 32 people shared my post with their friends.

This is exposure. And all I have to do is a one hour photo session and a few prints that cost me less than $10.

Do a great job on the contest winner - make her feel awesome - and she'll tell EVERYBODY!

So for a total of less than $50 I've got advertising that would normally have cost me hundreds of dollars. Thank you Facebook 🙂

I don't know how Facebook counts people who liked my page, but while they count 6, I count 45 that liked my page during the promotion. Much higher than our normal baseline.

So OK. Lets ramp our results up a notch. Let's engage with everybody who did not win and offer them a consolation prize of a free in studio family shoot of up to 6 people. After all, the vast majority of these entrants are mothers. Mothers like family portraits. So we engage with them right on Facebook and send them a coupon for a free session. This not only brings clients in the door, but it increases our Facebook engagement and therefore our Facebook edge rank. 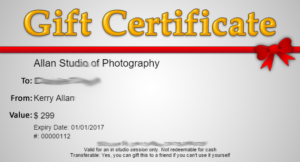 I run this contest every month. So far it's done wonders for my business.

It's cost effective and all it takes is $50 and some effort.

I'm into my 12th month of selfie contests and the participation goes up every month.

View all posts by: Kerry Allan